Welcome to our site!

The purpose of this website is to assist those training hunting dogs in finding the teachings of Jim Marti. Jim was a breeder and trainer of Burnt Creek Setters and author of training books. Please check our Publications page on the availability of his books and the Contact page for ordering information.

Jim wrote the Burnt Creek method in 1986. Revised one chapter in 1992. He read a lot of books, trained dogs, raised dogs, field trialed, raised some more dogs and hunted here – and – there around the country, He got a cauliflower ear from listening to people and their dog troubles and hunting stories. Long after he retired due to health complications, he would still give training advice to anyone that would call with a dog problem.

Jim began professional dog training in the early 1970s. After acquiring a dog named Jesse James, Jim devoted his life to the English Setter breed and revolutionized the training of them. Together with Dick Keller, they built Burnt Creek Setters near Baldwin. Success came with the Double Champion Jetrain, RU-Ch 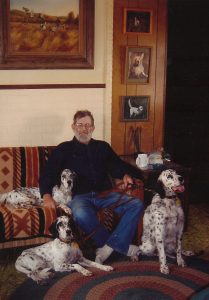 “I was also bothered by several aspects of the traditional training ways, ones that seemed to encourage dogs to pick up bad habits from the beginning, bad habits that had to be trained back out of them later—creating major chances for even greater errors.  I thought: “Why not bring the new puppy along step-by-step, teaching him to do things right—right from the beginning? Why not build him like the foundation of a fine house—a-building-block-at-a-time? You know: one-two-three.” 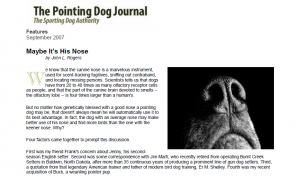 “Jim would want to know, before making a decision, if a young dog’s nose had been properly awakened and evaluated objectively before judging the youngster as having a faulty nose.
Speed, stamina, prey drive, bidability, style, and all those other prized bird dog qualities are important, he agrees, but he asks what good are they if the nose isn’t up to snuff? He makes a strong case for awakening a pup’s nose early in the game. Jim’s thoughts on the nose were timely and are being put to immediate use in my pup Buck’s early education.
In his letter, Jim says, “I am dedicated to helping the nose in puppies and young dogs by set-ups [planted birds]…arranging for every possible thing to allow and induce the nose to do its work. Awakening of the nose is the start of every single thing that is important in a bird dog. It only makes sense to get as much scent experience as possible. We need to get that nose discovered, going, usable, improving, and expanding,” he insists..”

The two publications that will guide gun dog owners while training their hunting companion are:

Each book is $35 which includes postage and handling
(add $25 for orders outside of the United States).

“The Smart Hunting book is a work of art. Thank you again for printing these treasures.”
–John Cotton,  Michigan, USA

“Jim’s books are the next best thing to being taught by an elder.”
–Jerry Warrington, Outdoor Columnist

“Ever since his first book came out, I’ve been a Jim Marti fan.  Marti has spent 20 years perfecting his line of purebred setters and the no-nonsense training tactics he explains in his books.  Easy to learn, the methods work for any breed of pointing dog.”
–Tom Huggler,  Author and GunDog Columist, QUAIL HUNTING IN AMERICA and GROUSE OF NORTH AMERICA

“I bought this book 10 years ago and have constantly referred to it while training/handling several different breeds of upland bird dogs. Marti is a no-nonsense bird dog trainer that is able to express a simple way of training in the words he writes. His “stop to flush” method of training is of particular greatness. I also found his method of teaching “whoa” and “heel” much easier than other authors recommend. Although he breeds, raises, trains and hunts Setters, Marti’s book is ‘breed blind’. You can train any upland dog to be a superstar by following his method.” – customer review

“Problem: Flushed birds are faster than my dog, and he is faster than me.
Solution: Jim Marti’s stop-to-flush method.  I’m tired of coming in third!”
–Datus Proper, Author, PHEASANTS OF THE MIND

Please see the Contact page to place an order as it has changed from the information in earlier versions of the books.

To place an order you may snail mail, call or email Jet Collins at Burnt Creek Press or use the PayPal feature.